Earlier this month I posted about making a Vintage Style Peasant Dress for my niece Layla. That particular dress was a test run at making a similar dress for her to wear at Thanksgiving.

My sister requested I make the dress based off a Pin she found on Pinterest of a similar Peasant Dress that also included a cute Turkey appliqué.

My sister purchased orange chevron fabric and lace she wanted used for the dress. She also bought a turkey appliqué for the dress (hence the name Turkey Peasant Dress). The appliqué hadn’t arrived yet, so she told me to go ahead and make the dress and she’d add the turkey herself.

I’m not too much into the chevron pattern and I wasn’t sure how that would look with the antique style lace she purchased, but I was willing to give it a shot and hope it all work good together.

After making the first peasant dress, and testing it out on Layla, I had a good idea where the flaws were in the construction. So when I began this “Turkey Dress” I come up with what I thought was a pretty good plan, for how to solve the armhole issue.

First I cut the armhole ever so slightly bigger than the original pattern. I say probably 1/4″ larger, mainly because I wanted just a little more wiggle room.

I figured the real issue with the dress was the bulky French seams in the arm, so I opted not to French seam the armhole. Instead I sewed the armhole to the sleeve (wrong facing) at 1/2″ as opposed to the standard 5/8″ seam, again to give some more wiggle room. Then, since I don’t have a serger, I sewed a tight zigzag stitch a 1/4″ away from the 1/2″ seam. After that I trimmed really close to the zigzag stitch. It kind of looks like a serger seam and I think it made all the difference.

The rest of the dress I finished up using French seams as before. Then it was time to add the lace. This where I wish I had thought this through a little more. After adding the hem to the dress and sleeve I added the lace. The lace was a good 2″ wide so basically it was adding another 2” to the sleeves and skirt making it longer. Thus, the sleeves were so long on Layla and had to be rolled up.

If I could go back and make this dress again I would subtract 2″ from the sleeve and skirt then hem and add lace. This way it should balance out making it the intended length of the pattern.

Lastly, my sister requested I make a tie for this dress, as she really liked the one I included in with the test dress. At first I thought I’d make the tie out of the lace, but I had only just enough for the trim. As for the chevron fabric there was only a bit left so I did what I could.

I had just enough for a tie, but it had to be cut opposite of the dress pattern so the chevron is going side to side instead of up and down.

My sister loved it when she got the dress and added the appliqué turkey. Luckily the adjustments I made worked perfectly and dress fit Layla well. They even liked the tie, though I thought was a bit odd in direction.

I couldn’t be there for Thanksgiving, but I did get sent a photo of Layla wearing the dress. I’m glad the dress turned out well and happy with how it compares to the inspiration dress. 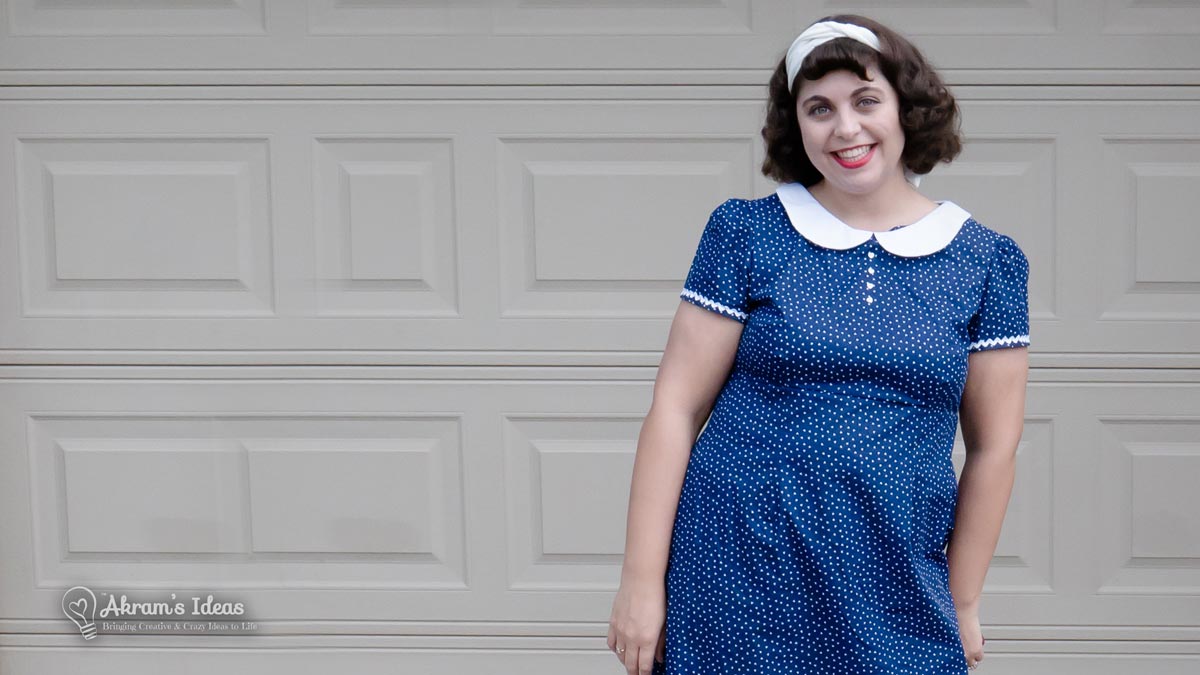