It has been a long time coming but we finally signed the paper work selling our old house in Oklahoma City. The house had been up for sale for almost two years now, and we were beginning to wonder if we’d ever get it sold. The whole event was kind of bitter-sweet. We were glad that we weren’t going to be paying to mortgages any more, yet kind of sad to say good-bye to our first home. Don’t get me wrong we love our new (old Victorian) home in Pittsburg, not only is it bigger but also packed with character. However, we had put so much work in our old house, not to mention it was our first home.

Originally the house was my husbands who had bought it in 2003, three years before we got married. It was his first house and in the three years he had it, other than some yard work and some necessary fixes he hadn’t really done much with it. Not that I was much better, when I first moved in I did complain about the wall paper entry, bathroom and kitchen, but other than the occasional picking on it I never did much with it.

The house was a quaint 3 bedroom just over 1000 sq. feet. This meant we each got a separate bedroom to use as an office. My designated room I would paint several times, before finally settling on a creamy off white and going for a sort of cuban tropical feel. I had amber shelving and green accents. The curtains where actually a fabric shower curtain with palm trees and I even had a light fixture with monkeys on it. I tried to go with a theme for each room, the living room, while I never got around to painting was asian style, and always hoped to redo the kitchen in a retro 50’s style.

The opportunity to redo the kitchen came up about a year before we left. When my husband discovered that the wood working department at the tech center were he taught, had built a kitchen for a client who then never paid. Since they cabinets were already done, they needed to get them off their hands, and were able to buy them for a steal. They even offered to make some adjustments to the cabinets so they would fit our kitchen layout. The kitchen remodel took almost a year, but only because my and my hubby were working 40 + hours a week plus going to school.

Just as we finished the kitchen, when  low and behold we found out we’d be moving to Kansas. At the same time we also knew that the house would never sell in its current state, sure the Kitchen was brand new, but the rest of the house needed updating. So, all the changes we always wanted to make to the house finally had to be completed now that we were planning on selling it.

We started next with removing the felt wall paper that was in the entry way and my husband did all the trim work, which would later be good experience for several projects in the new house. I choose a yellow / light orange type colors for the wainscoting, while the trim was painted white.

My favorite change was made to the bathrooms. The main bathroom had an ugly wallpaper and both had wood wainscoting, wooden shutters, and carpet. I had for a long time wanted to paint them blue and white and here was my chance. My husband worked on replacing the old carpet with tile and even installing a new sink in the larger hallway bathroom. I loved the way they turned out.

The bedrooms all required a new coat of paint. I choose a creaming off white by the name of “cake batter” which my husband claims I choose it only based on it’s name, but I disagree. I really like the curtains I had in the rooms so I took them with me and instead replaced them with the dark blue curtains from our new house. My mother in lay suggested accenting them with some brown sheers from.

The house always seemed so dark to me mainly because of all the wood coloring. For example the hallway had floor to ceiling cabinets, great for linens and the like, but were a dark wood color. We painted them white, as I always wanted and it instantly brightened up the whole hall.

Besides the facial makeover, we also had the roof done, the foundation repaired and the carpet cleaned. The Air condition was only a year old (having replaced it the previous summer) and the plumbing only three years old. In the end this 1960 something house was all up-to-date. And looking at all the hard work we did I was depressed that we hadn’t completed these updates while we were there. Both me and my husband agreed that in our new house, we wouldn’t wait till it’s time to move to make changes. We’d work on the house as we go, making changes to make the house our own.

Although it is kind of sad to let it go, both of us agreed we had outgrown the house, besides it was time to focus on our house in Kansas. Yet, this house will always be our first home. 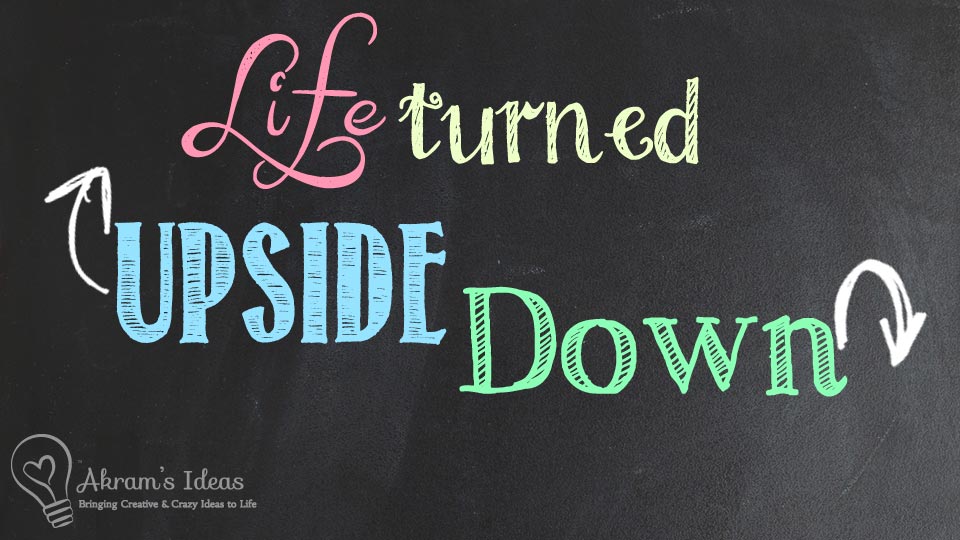 It feels like life turned upside down, due to all the home repair/remodel projects. Our attic project has become a bigger project than anticipated.