For Memorial Day I decided that I would make a Pie! Since I was on this whole #StopPinningStartDoing campaign I figured I’d make a recipe from my pie board.

The pie I decided to go with was the Glamorous Housewife’s Ultimate Strawberry Pie recipe.

Apparently the recipe was originally pined by the Glamours Housewife from the Willow and Bird Baking site.

Now it’s no secrete that I love strawberries. I could eat them everyday if only they were in season all year around.

They are good by themselves or topped with a little cool whip. This berry is even great in pie or cake, and yes ice cream!

Besides being called the Ultimate Strawberry Pie, the other thing I really liked about the recipe is that it only had a few ingredients. This made it easy to whip together.

Yields 8
A delicious Strawberry Sour Cream Pie
Write a review
Save Recipe
Print
Ingredients
Instructions
By Akram Taghavi-Burris
Adapted from Glamorous Housewife
Adapted from Glamorous Housewife
Akram's Ideas https://akramsideas.com/
As usual I took the original recipe and made it as sugar-free as possible substituting Splenda for sugar and used Lite Sour Cream to cut down on the calories.

The recipe called for  1.5 lbs of strawberries hauled and diced into bite sized pieces. I bought 2 lbs. so I could reserve a few strawberries for garnishing the pie later.

After the strawberries were diced up, I began work on the mix. I shifted together the dry ingredients and then mixed in the sour cream and vanilla.

The mixture seems a bit thick, kind of like cake batter. After making sure I had the filling well blended I folded in the strawberries.

Once the filling was all together I placed it in a store-bought pie crust. I could have made one from scratch, but since I was on a pseudo vacation I figured, I used that spare time to relax instead.

I baked the pie according to the directions at 350 degrees for 30 minutes. My husband said that although the pie tasted fine, he thought it might have been able to come out a bit sooner, than 30 minutes.

I suppose he was right. I didn’t actually go check the pie, I only set the timer and waited for it to ding. So, in hind sight I think I’d watch it more carefully and take out a bit sooner.

Overall the pie was delicious and even better when topped with cool whip. We could wait to dig into the pie, so we waited till it was at room temperature to serve, but I think the pie would have been even better if chilled in the fridge for a while before serving.

Everyone seemed to like the pie. However, my husband commented that he’d prefer my Lemon Berry Pie just a bit more.

Enjoy an Island Treat with this Coconut Cream Pie Recipe

With spring break right around the corner, why not whip up a delightful coconut cream pie with this quickie bake recipe.

With Valentine just around the corner ditch, the chocolate for this rich and creamy Chocolate Covered Cherry Pie. Oh, and it's a quick bake. 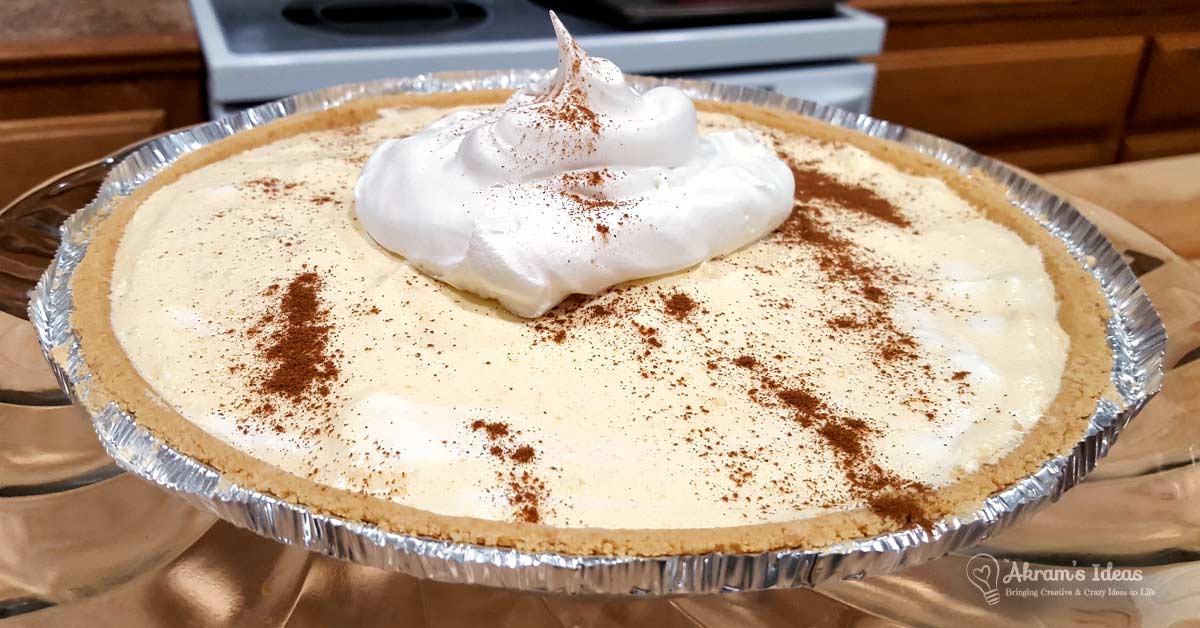 Recipe for a rich and creamy no-bake eggnog pie with only 4 ingredients, that makes for a quick and easy holiday make.